Barrow Gurney 2nd XI pulled off an amazing victory on Saturday at Hobbs Lane thanks to a maiden hard-hitting unbeaten century from Nick Heal.

With Barrow Firsts having an early season break, all the attention was on the Second XI who were hosting Bradley Stoke 4ths. On a warm and sunny day, the visitors won the toss and batted. Bradley Stole opener Prabhauker Karuppannasamy began with some powerful straight blows, taking advantage of the short straight boundaries, however Dave Smith bowled really well and despite having 2 chances put down in the slips still took 2/33 off his 8 overs. Nick Heal continued the good work and was unlucky to have the Bradley Stoke opener dropped on the boundary, resulting in several more big hits and he bowled better than his 1/44 showed.

Adam Brace finally dismissed the opener for 94 as he aimed a mighty blow to reach his ton and was bowled, and then took 2 further wickets to give him figures of 3/43, the last courtesy of a brilliant one-handed catch on the boundary by Paul Gard.  Although the scoring rate had slowed somewhat from a fast start, clever rotating of the strike kept the scoreboard moving and the visitors finished with an imposing total of 237-6. 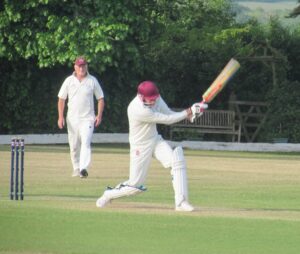 Nick Heal hitting one of his 7 6s

Barrow lost early wickets in reply and after 15 overs were 59-3 and struggling. Mark Gracey managed a brief counterattack scoring an attractive 30, but when he fell, another wicket fell quickly and with Barrow reeling on 88-6, the game looked destined to peter out to a disappointing loss. But Nick Heal was then joined by Adam Brace, and they had other ideas. Adam was elegantly pushing singles into the gaps on the offside whilst Nick used his powerful arms and wrists to whip several deliveries to the onside boundary. 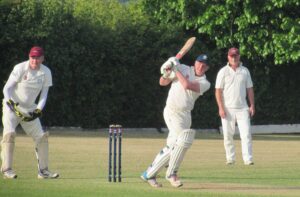 As the partnership began to build, the pair enjoyed a little bit of good fortune with a couple of boundary chances being parried over the ropes for 6.  But having reached his half century Nick opened his shoulders and suddenly Barrow had a glimmer of a chance. Brace, having clipped one of his legs for 6 fell for 25 out of a partnership of 140 with Heal, who then, with an over to spare won the game with a 6 again courtesy of a boundary fielder, Barrow notching up a 3 wicket win. Heal’s breath-taking 123 not out, was his first century, and came off only 77 balls with 7 6s and 17 4s, and brought huge delight to his teammates and all who were watching. His knock was even compared to Ben Stokes’ famous innings at Headingly in 2019! 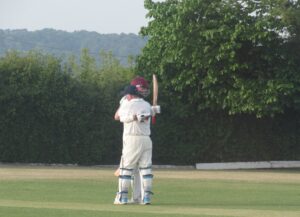 Nick and Adam embrace as Nick reaches his ton

So, with an unlikely first win of the season under their belts, Barrow 2s head to Golden Hill next week, whist the Firsts entertain Hanham 2s at Hobbs Lane. 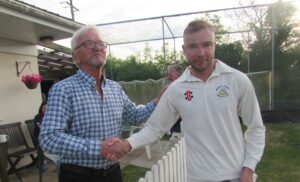