Barrow Gurney Firsts got off to a flying start in their first league game this season beating Pak Bristolians 2s by 7 wickets at Hobbs Lane.

The visitors chose to bat first but soon struggled against the accurate bowling of Mark Fisher (8 Overs 2/13) and the pace and bounce of Jonny Sykes (2/19). Matt Owen (8 overs 2/19) kept up the stranglehold as Barrow put in a fine performance in the field supporting their bowlers taking all but one chance offered. The introduction of spin brought a brief flurry of runs but Barrow captain, Frank Forge, soon induced some rash shots and was the most successful bowler with 3/31. Connor Jones chipped in with a late wicket (1/16) giving wicket keeper, Bernie Forge, her fourth catch behind the wicket in the innings. 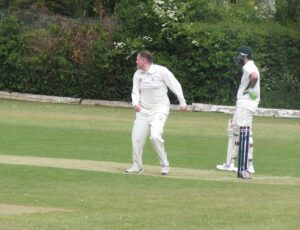 In reply Mark Brown (20) got Barrow off to a quick start before debutant Jason Cryans (43) batted with increasing fluency in an innings which promises much for the season to come, with one straight drive for four being the shot of the day. Bernie Forge (23) joined him and used the sweep shot to good effect against the spinners before top edging another one just before the game was won. Vice-Captain, Ed Holdaway (12 not out), took the team over the line for a 19-point win. 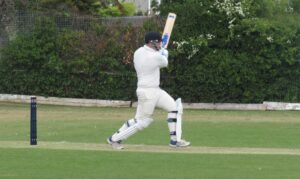 Unfortunately, Barrow 2s could not repeat the winning ways away at Midsomer Norton 3rd XI. Batting first on a difficult wicket Barrow were bowled out by some accurate bowling for 119 with another debutant, Josh Yelland, putting in the highest score of 20. The home side knocked off the total for the loss of only 2 wickets as the bowling attack struggled to find the same accuracy as the opposition. Nick Heal was the exception bowling 8 overs for 22 runs and taking the two wickets that fell.