At Hobbs Lane, Barrow batted first and having lost Mark Brown early and Jason Cryans having to retire hurt, Guy Fisher (15) joined Kieran Owen to rebuild taking the score to 52-2, Ed Holdaway then joined Kieran and took the total past 100 but with only 10 overs to go a competitive total seemed out of reach. Quick running and some explosive shots followed and the pair cut loose hitting 70 off the last 4 overs of the innings with Holdaway (121 not out) hitting 11 sixes and Kieran Owen (72) who was dismissed off the last ball hitting 3 of his own. Their spectacular partnership realised 184 in all and Barrow posted 236-3. With the momentum of the match having shifted firmly in favour of the home team. 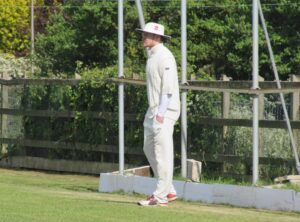 Hanham started with positive intent bit could not get Mark Fisher away as the accurate seamer bowled 5 maidens in his 8 overs taking 2 wickets for 4 runs. There were wickets too for Matt Owen (2/35), Ed Holdaway (2/10) and one apiece for Nick Heal and Jonny Sykes as Barrow pushed for a maximum points win, but it was not to be as Hanham were 8 down at the close, leaving Barrow winners by 73 runs.

At Shine Sports Ground, Golden Hill batted first against Barrow 2s, Phil Taylor being the pick of the bowlers with 2/24, Paul Gard also picked up a wicket but the home side built a total of 191-4 without really ever getting on top of some accurate bowling.

After an early setback, Ellie Holdaway (29) and Josh Yelland (44) played well, clipping some boundaries through the leg side in particular before Mark Gracey provided further acceleration falling for 49 with Barrow eying up a win. A lower order collapse, coupled with some injuries preventing quick singles made the target much harder but last man Phil Taylor joined his skipper as the team (literally) limped over the line.