Barrow Gurney’s winning streak continued as they visited Brislington 3rd XI this week, as they triumphed in another close encounter.

The home side batted first on winning the toss, Mark Fisher then continued the metronomic accuracy of his season so far, taking a catch off his own bowling to dismiss the opening batsman, giving him figures of  1/18 before an injury prevented him completing his full allocation of overs. Jonny Sykes (1/54) was more expensive but took the wicket of the other Brislington opener. Connor Jones (1/46) added to the wicket tally before the home side suffered a pair of run outs. 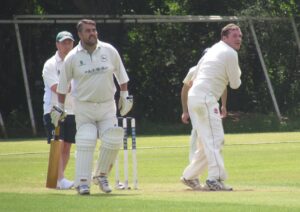 Nick Heal’s off spin proved to be most effective, his 3/19 off a full 8 overs being the best of the day, fellow spinner Frank Forge (1/34) took his 100th First Team wicket for Barrow as Brislington ended on 191-9.

In reply Barrow lost early wickets and at 46-4 looked to be struggling. Josh Yelland and Bernie Forge steadied the innings with a 53 run partnership before a running mix up meant that Forge departed for 16, whilst ensuring that Yelland, who was batting fluently, continued to edge Barrow towards their target. With 2 sixes and 3 fours, Yelland made his maiden first XI half century, but when he fell for 52 there were still 37 needed and only 3 wickets left. Barrow then soon found themselves 8 down before Nick Heal (33 not out) continued his good form of late to bring Barrow home and take them top of Division 5 of the Bristol & District League after 5 games. 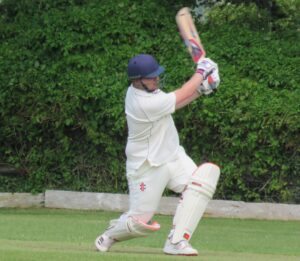 Jordan Allen’s 66 was the highlight for the 2s

With some key players elevated to the First Team, Barrow 2s struggled at home against Timsbury 3s with Jordan Allen’s 66 being the highlight of an innings which realised only 147 on a good pitch at Hobbs Lane. Timsbury were rarely troubled as they knocked off the runs in 24 overs for the loss of only 4 wickets. Barrow captain, Peter Rooney, had the best figures taking 3/37.