Barrow Gurney’s first game of the season got underway at Hobbs Lane on Saturday in delightful conditions. Playing a friendly game against a Redcliffe side the hosts bowled first.

Mark Fisher and Jonny Sykes, both bowled well for their first overs of the season, but without luck, as only one chance came, put down by the diving Connor Jones at point.

There was still some moisture in the early-season surface making batting difficult and Redcliffe dug in but scoring shots were few and far between. Mike York had another chance dropped but a direct hit run out from Mark Fisher took the first wicket.

Alan Webb (2/32) and Connor Jones (2/32) then enjoyed success whilst the batters accelerated to post a score with both Mike York and Guy Fisher taking excellent catches.

Redcliffe closed on 168-8 and needed early wickets. Left armer, Dewage duly obliged yorking both Guy Fisher and Connor Jones in the first over. 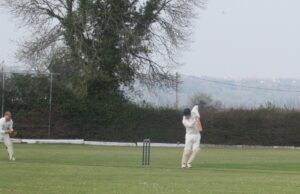 Ed Holdaway and Mark Brown dug in and set about building a score on a pitch which was drying out but against some good Redcliffe bowling.

Brown retired on 50 not out whilst Holdaway was caught at point on 46 attempting to reach his own half century. 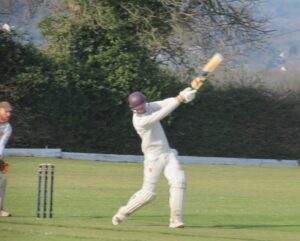 Jonny Sykes (30) and Mark Fisher kept the score board ticking along with Sykes hitting one massive six off a full toss before being caught behind.  Mark Fisher (22 not out) saw the home side to an opening win of the season by 5 wickets with 13 overs to spare.